When Sinjar was liberated
in November 2015
the Peshmerga uncovered mass graves,
one containing 78 Yazidi grandmothers.

When the black-clad conquerors arrived in August 2014
they sorted the Yazidi women by age, a simple triage:
The maidens to be sex slaves, their mothers to be servants,
their grandmothers to be shot or buried alive.

This poet will refrain from comparisons to the Rape of Nanking, My Lai, Sabra & Shatila, or countless historical parallels. Neither posit the Rape of the Sabine Women as the starting point of Roman Civilization. Nor equate warrior culture, religious fundamentalism, and patriarchy. Nor analyze the rise of this particularly savage apocalyptic cult.

Only say, there is a grave in Sinjar
containing 78 grandmothers.

Only say, the poet's curse be on those who disrespect grandmothers.

May they be immediately rendered impotent and suffer a thousand humiliations and torments, and may a coward's death soon follow.

John Roche
(who, by the way, lives when he can in Albuquerque, in fact as moved here
and just got married to Jules Nyquist of the very active Poets Playhouse) 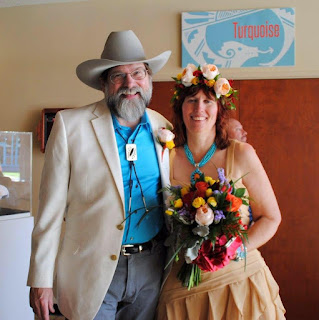 Posted by Larry Goodell at 1:40 AM