THE OUTSIDER, by Stan Rogal

after Merle Haggard
“I turned twenty-one in prison
doin’ life without parole.”

Strange.  Stranger.  Not Camus, though parallel
Arrested action.  In any case, a bust with convention
Which ends
a head on the block.
Nothing the French invented.
Workin’ man blues, & so on.  On the prowl.
Nose for news, & so on.  Also on the prowl.
All so loosely translated, begins:
In the beginning was the word
Defines:
“…actual linguistic behaviour or performance of individuals
in contrast to the linguistic system of a community…”
Outlaw existential
Ism
Momma barely dead & buried
Sparks a reefer, drinks a café au lait, goes for a swim
Fondles the butt’ry thighs of a moist young gal in the back row
of a darkened movie theatre
Fails to unriddle
The comedy of a crucifix hung like a dagger in the flick’ry light
& what was it someone said?  Reading a translation
Is like fucking a bride through a horse blanket?
Nay, too rude a remark for Pablo who rarely (if ever) kissed
Down between the stems on paper or any otherwise public
Prison.
Then?
Heaven knows momma tried, momma tried.
Now left to the blear and roar of ocean.  Knows (as well)
The world is inarticulate, friend, & a recurrent car wreck.
Who learned to drink bourbon neat, tap ashes in the beer for strength
Can only reconfigure
If a single bullet does the trick
What boots this desire to plug further, except,
No desire?
Funereal meats coldly furnish forth the execution.
Man in black sing:
Shot a man in Reno, just to watch him die
Time being out of joint axes it.
Crucifix hung like a dagger in the flick’ry light. 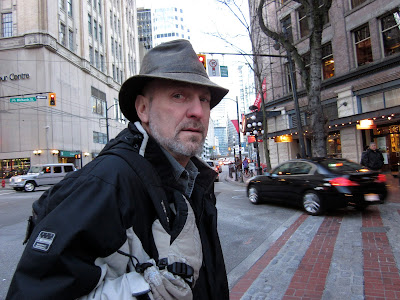 Born in Vancouver, now residing in Toronto these many years, Stan Rogal has published 17 books: 4 novels, 3 short story and 10 poetry collections (including a Selected Works).  His work has appeared in numerous literary journals in Canada, the US and Europe.  He is also a playwright with productions having occurred variously across Canada.

He will have a collection of haiku dedicated to the late Richard Brautigan published in the spring, 2013.  The poem included here is part of a collection titled “After Words” which has been recently contracted to appear in 2015.
Posted by rob mclennan at 10:00 AM