Wake upside-down. Curl-up for breakfast.
Spiral and twist in the shower until your hair dries
on its own. Push the car to work. Hurdle
up to the office. Prepare paperwork with arms tied
around the back. Wrestle the photocopier.
Somersault to and from the washroom.
Hold your breath throughout the meeting.
Bench press the boss. Pole-vault your shopping
bags to the front door. Show-jump over the couch.
Eat dinner with oars. Head-butt the television
into focus. Hammerthrow the kids
to drama club. Then take a deep breath
and trampoline off to bed. 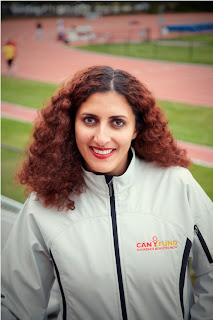 Priscila Uppal was born in Ottawa in 1974 and currently lives in Toronto where she is a poet, fiction writer, academic, and professor of Humanities and English at the undergraduate and graduate levels at York University. She is the author of eight books of poetry: Winter Sport: Poems (2010), Successful Tragedies: Selected Poems 1998-2010 (Bloodaxe Books U.K. 2010). Traumatology (2010), Ontological Necessities (2006), Live Coverage (2003), Pretending to Die (2001), Confessions for a Fertility Expert (1999), and How to Draw Blood From a Stone (1998); the novels To Whom It May Concern (2009), and The Divine Economy of Salvation (2002);  and a critical study on elegies, We Are What We Mourn (McGill-Queen’s University Press 2009). She is also the editor of several anthologies and essay collections, including The Exile Book of Canadian Sports Stories (2009), The Exile Book of Poetry in Translation: Twenty Canadian Poets Take On the World (2009), Barry Callaghan: Essays on his Works (2007), Red Silk: An Anthology of South Asian Canadian Women Poets (2004) and Uncommon Ground: A Celebration of Matt Cohen. Her works have been published internationally and translated into numerous languages including Croatian, Dutch, French, Greek, Italian, Korean and Latvian. In 2010 she was CANFund poet-in-residence during the Vancouver Olympics and Paralympics, and again in 2012 at the London Olympics and Paralympics.
Posted by rob mclennan at 10:00 AM