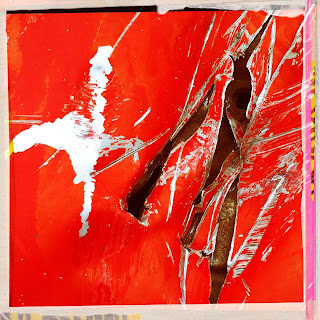 Again it is my great pleasure to offer a poem by Josh English.

I over-estimate the trajectory, the ball’s red stitches
signaling through falling snow like a code I’ve misread,
and swat to make a barehanded catch.  And I feel

nothing.  I look at the ball buried in my blunt hand.  Nothing.
A shovel a block away hacks at the ice glazing everything.
Already, the insinuations of peeved nerves snap up my wrist.

By the time I hear the leather slap of Seth’s catch,
I have thrown my own glove down, as if it were the culprit,
the unsteady nurse who pricks and pricks her needle

up and down my forearm, missing the blatant vein.
In winter, imprecision trips pain, but the pain is slow.
The sedan’s locked wheels as it skidded sideways, a mooring tanker,

into my front lawn yesterday.  The car a crumpled hulk
my neighbor Pete stumbled out of, blood unspooling from his mouth.
When his balance returned he began beating the car,

the down feathers bursting from his torn coat like smoke
over the hollow cannon fire of fists slamming the hood.
Snow like stone-dust the night ground from walls

of whitened clouds, morning’s ash of a fallen empire
refilling the tire tracks we toss the baseball over today.
After the sting splinters into ache and disperses, we continue

our game of catch, absorbed by the boyhood rhythms,
so precise I can feel the minutiae of its physics
melting in my arm, the flurries of torque

and curve dissolving as I adjust the out-held mitt,
its center blackened by a dozen years of reception.
The needle punched into Pete’s fattened lip

as he sat on the white hospital bed, the numbing
spreading to his chin, he drooled while a doctor
sewed the pulp of his mouth shut.  It will be a week

before you can understand anything he says.
Now I can hardly see Seth as he cranks back for his throw.
It’s as if snow wants to remind us we are erasable.

In silence, the cars slur through hazard by us,
and the ball cracks in my mitt like a punch
from somebody who remembers what it’s like

to be beaten, how it feels to watch the beating
come right for you, and how, when you close
your eyes, all you see is snow.