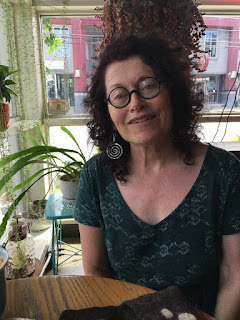 London tastes like this
at least   in Hackney   (Islington?    deBeauvoir?)   a large wet garden strewn
with fairy lights
& writhing worms

She’s in London tonight
drinking Yunan Tuo    though actually in Kentucky, marking
students’ work
as another mass of clouds drifts from the West
about to release
- slit by lightning –
sky-rivers obscuring trees, cars, ground

In London
it tastes of


bitter-fig    at once
simultaneous
pressure and      a being free

--What does it mean then

necessity of steel   tonnage  a crammed    jet’s lift
scrawling deadly carbon on a night sky to even
approach the distant city.

This poem is part of a developing series into which I am crumbling fragments of experiences from my travels to the UK over the past decade. At present, this incipient ms has a formless form...it's still emerging. But this "green tea poem" presents (I hope) some of the strangeness of living in more than one place when you are physically anchored in (just) one.

Merle Bachman is Associate Professor of English at Spalding University in Louisville, KY where she directs the BFA in Creative Writing. Two chapbooks of her poems have been published, as well as two full-length collections (with the British press, Shearsman Books), the most recent of which is a fractured memoir called BLOOD PARTY. Bachman is also a translator of Yiddish poetry and was a Yiddish Book Center Translation Fellow in 2015.