He said he knew women,
understood what they wanted.

He was quiet, an artist.
He wanted to teach children.

On the third night of college, one a.m.,
He took handfuls of my grey dress.

His dark hair matted in curls against his forehead;
this is what you want, he said.

He touched my spine, his fingers on bone
like the striking of a match.

He pressed me against the concrete,
cold and white. I could not breathe.

After he finished, I reached for
my shift, my underwear.

He wrenched them from my hand
He threw an afghan, with pink tulips

and sunflowers across my body
and walked away.

Later that year, with hundreds of women
he marched to take back the night.

I wondered how his hair
looked, beaten by wind, how many girls
touched his hand, thanked him.

He said he knew women,
understood what they wanted.

The Earth Was Still for Her

Hands clasped around an arching womb,
flesh strong and taut against prickly fingers
seeping cactus oil, she is the desert
waiting for waters to leech from stretched skies.

With each moan the landscape shudders and is still.
Her breath is her child’s compass. The desert
knows a universe in its feldspar, in the quaking quartz
and mica that shine on her arms, the stone of her flesh.

The pygmy owl perches and the gila woodpecker
sop up the fetid air in sandstone feathers,
they crown her with a violent flourish of wing.

The air does not move as she reaches for this new
creature, the limp shadow, bloody in
her arms.  And another love becomes the crust of the earth,
welling and dense with our children.

I wait for new paint, new canvas
to stretch my body and douse me in fiery liquid.
I am the landscape, the ebb and flow of earth. 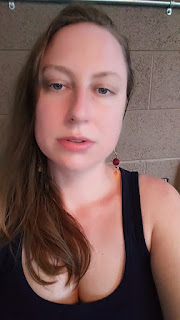 Emily Hansen grew up in the Blue Ridge Mountains and collects old cigar boxes. “The Earth was Still for Her” discusses the idea of cycles.  As a painter and a writer, she combines these ideas to create poetry that is vivid and painting-like in its close up perspectives. This poem attempts to tie the earth with the body and discusses loss as a part of the human experience.

Emily’s poems have appeared in WNC Woman, The Appalachian Anthology, and Aberration Labyrinth.  She has also published an historical research article in a mini-magazine through a project for West Asheville, funded by New Belgium Brewery.