Jerry McGuire, Why (Not) Mediation?

When I play “Moon River,” I have before me the presence of Audrey Hepburn in Breakfast at Tiffany’s. The sounds make me remember her and she makes me remember the sounds. . . . There are these extra-musical recollections: rainy New York streets, Audrey Hepburn’s impishness, the Hollywood romance. The song caresses these places and events and her. (David Sudnow, Talk’s Body 53)

When I was a little kid I was surrounded by music and homegrown self-taught musicians, and also by people who, in quite idiosyncratic ways, valued writing, or at least reading. I had a great reputation as a singer (not a reputation as a great singer) when I was six or seven, and had a pretty good repertoire of lyrics—especially, though not only, things by Hank Williams, Hank Snow, Webb Pierce (but he, unknown to me, was singing a song recorded in the twenties by Blind Blake—and it wasn't new with him, either), and Tennessee Ernie Ford. So it seemed natural that I’d try writing my own lyrics—though I wasn’t writing longhand yet.
My father worked in a paper mill, and there was a place where incoming loads of junk paper that would be pulped for boxboard were dumped by the truckload. Before it was taken to the “Beater Room” (I don’t know what that means, but it was a big part of my childhood), the men (they were all men there) would go through and grab things to take home—lots of comic books, mainly. But my father, though he brought home comic books for my older brothers, also brought home a variety of other stuff, including Bibles, medical journals (no doubt dating from the 19th century), novels, and even blank paper. A great prize, which he gave to me—I think I begged him for it—was what I now realize was an accounting ledger—tall yellow pages with inscrutable vertical lines. This became my first “journal”—the place where I began writing poems, which is to say, sort of a six-year-old’s version of hillbilly songs. I kept that thing with me for years before it disappeared; somehow I feel that I’d be a better writer now if I were still writing in it. It’s the first thing that ever struck me distinctively as a medium for writing, and my interest in all sorts of media has its origin, inasmuch as I can recover it, in those rough, tall, yellow, oddly-lined pages full of fragmentary childish songs. Each page provided extraordinary space—room for little pieces of writing to feel quite big in, but also room to grow.
And then one of my brothers brought home a reel-to-reel tape recorder and had me sing into it. He played it back. The rich, tuneful baritone I heard in my own head, I discovered, was the squeaky, tuneless, alien voice of a strange little boy. Yet if I was appalled, I was also fascinated, and my brother and I played with the thing for hours, making up dialogs, singing along with records, recording people when they weren’t paying attention. If it was a toy and a piece of alien technology, it was also, even to my eyes, magically transformative: everything temporary became permanent in that thing, in ways that mattered.
Just one more autobiographical detail. In my twenties, snowed in in a wicked Connecticut storm, I found myself fixated on my girlfriend’s large artist’s drawing-pad. But I’m incapable of drawing a straight line, or a circle. I can’t do a passable job of tracing my hand. So my fixation seemed to have nowhere to go, until I stumbled on her box of magic markers. I made several false starts with them, and found myself idly using different-colored markers to write and to edit my writing. Looking at this there on her easel, I felt that little flashbulb go off in me, and before I knew it, I was consciously trying to write a poem that could only take shape in that specific mediated context—large paper, several colors of magic markers, revisions a part of the process. Here’s the thing I wrote, which wound up on my refrigerator for several years. It’s a photoshop simulation—you’ll just have to imagine this, say, 24 X 36 inches with scattered coffee and butter stains (but if it were on immaculate white paper and 8½ X 11, you’d have to imagine that, as well): 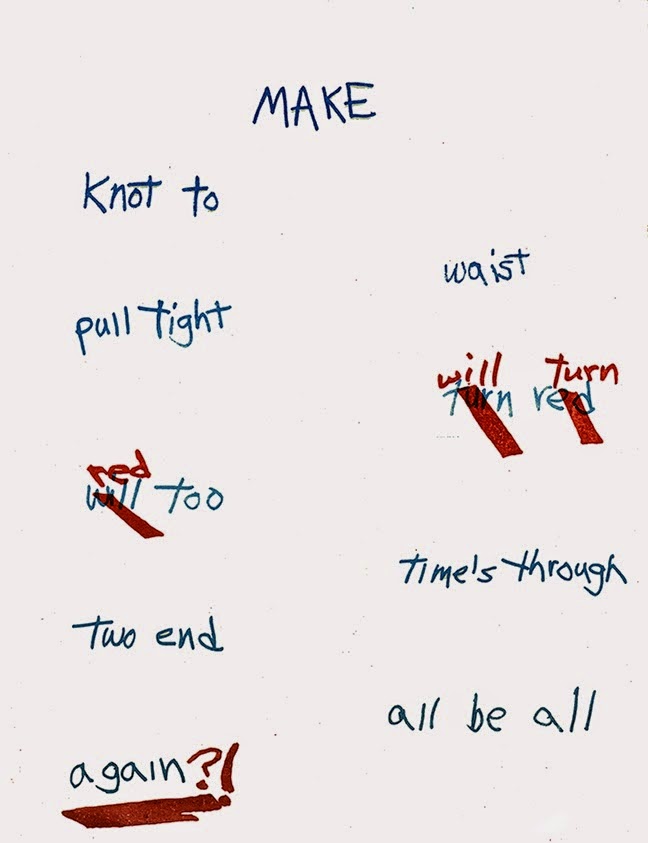 So that’s the kind of thing that brought me to my interest in mediation—how the various stuff of our lives (a ten-year-old Romanian girl once told me that “stuff” was her favorite English word) affects how we produce and consume things, especially works of art. This month I’m going to use Truck to present a variety of visual and verbal (sometimes both) works that address questions of mediation. I’ll be writing introductory comments about the writing and visuals I'm uploading, not to establish any particular expertise, but to provoke interest and suggest ideas. By all means, please skip these if you're just interested in the poems and visuals themselves. But (in case anyone does read the introductions) I also encourage everyone, but especially the artists who wrote, painted, constructed, or otherwise produced these works, to respond to the works themselves, and to my comments, especially where they find those comments wrong-headed, bone-headed, pig-headed, misleading, or simply vacuous.

Posted by Jerry McGuire at 4:05 AM