A few pages from “Settlement” by Christine Stewart

A few pages from “Settlement”

Using the word ghost is good because that’s what the old people say when they talk about white people in this country: “Ghosts trying to find their clothes.”

M. Campbell, The Book of Jessica

Outside wealth
Imputes in trees
Draws over

Footage in house-swells
The rate of real estate

While in which I am smaller
But just as smug

A mid drift of sentient pretension

The riverfloor over soaks
In shit, a scorched beauty

With few sturgeons
To swim to

We “can’t see the figures for the desecration”[1]

But I vies diminutive and
Plies more gain for these little man-like killers.
(wot we must! pop sum)

Consummate convicts
Of no existence

Froth in every silvery aside
(sobbing camouflage)

My transience gives me settlement, makes
You nomadic this logic bleats with literal addictions

Thus, I am biped anonymous

A whole fistful of phantoms

Of wilderness a just blank
Ur Plains [fur North]

And stories
Never you mind

Community standards affiliate and public
Heads back up in manly panders

You may mark
The exact and stain of it

Of tar sands sucking up
Ducks in present gasps of circumstance

Deplorable adorable
“But consider” the redactor

Stabs of circumstantial justice
Be plied portion my land section

Here’s my money; here’s my mouth
But “the land here hears Blackfoot and Cree”[3] 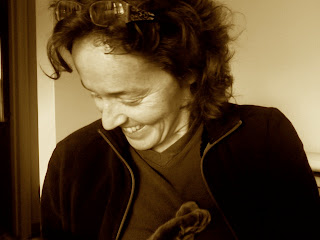 Christine Stewart works in experimental poetics and creative research in the English and Film Department at the University of Alberta and the Learning Centre in Boyle Community Services, downtown Edmonton, Alberta. This selection from “Settlement” is new work from the Underbridge Project. Forthcoming books: Virtualis: Topologies of the Unreal with BookThug and The Humanist with Red Nettle Press.
Posted by Unknown at 9:22 AM