José Rodeiro, a Florida Muralist in the Grand
Manner by Tara Dervla 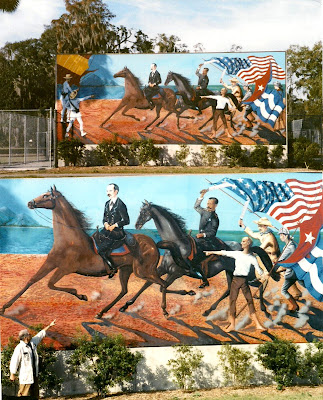 In the 21st Century, painting large-scale epic imagery in the grand manner is something undervalued and, as a rule, rarely pursued.   However, among academic fine-artists, from the time of Apelles of Colophon (or “Kos”) in 4th century BCE until the 19th Century CE, the grand manner exemplified the highest achievement of both European and American Beaux Arts traditions, manifesting in an array of major 19th Century works, e.g., Théodore Géricault’s  Raft of the Medusa (1819) or historical works by Elizabeth S. Thompson (Lady Butler); such as her Charge of the Royal Scots Greys at the Battle of Waterloo (1881-1890). Since 1910, the concept of grand manner painting as an unrivaled distinction or pressing issue in the visual arts has year-by-year diminished or it has been exclusively relegated to Hollywood filmmaking, spanning from D. W. Griffith’s Birth of a Nation (1915) to Steven Spielberg’s Lincoln (2012).   Nevertheless, this unique need to depict grand-themes populated by many participants initiating a climactic moment (by means of specific or explicit actions or gestures) as actors in an epic-drama painted in a grand way, portraying portentous heroic subjects, which symbolize significant historical, mythological, legendary or religious events.   With the exception of the Middle Ages, this arduous and demanding genre has dominated classical academic art in “The West” for centuries.   Today, only a handful of brave painters dare to fathom the sheer possibility of painting in the grand manner. One of these intrepid neo-grand manner artists is the Tampa-born muralist José Rodeiro (a Visual Artist Fellow of the National Endowment for the Arts), who is also the recipient of many other major awards including a Fulbright Fellowship, an Oscar Cintas Fellowship, several official artist residencies, and other awards.  However, before discussing a few grand manner works by this Floridian, we need to elaborate more on the stylistic evolution of the grand manner in order to place Rodeiro’s contribution in art historical context.

The GRAND MANNER:
The first grand manner paintings occurred within the School of Sykion during the reign of Alexander the Great.  One of the first images was Apelles of Colophon’s famous and lost Battle of Issos that inspired both Philoxenos of Eretria and Helen of Egypt’s missing copies of that work.  However, before those three works vanished, they circuitously inspired the 1st Century House of the Faun Battle of Issos mosaic copy (whose author remains anonymous), which was unearthed at Pompeii (Italy) in the 18th Century.  As a style, both in painting and sculptural-relief, the grand manner persisted throughout Roman times, but generally disappeared in the Middle Ages; although, Queen Mathilda of Flander’s Bayeaux Tapestry (1067) with its thousands of figures upon a 225-foot-long embroidered scroll depicting the Norman Conquest of England by her husband King William the Conqueror of Normandy (France) in 1066 does contain many standard grand manner elements.  Then, in the Renaissance, it reappeared with Giotto, Masaccio, Botticelli, Leonardo, Michelangelo and Raphael, as well as other grand manner practitioners.

The modern grand manner method emerged in the Baroque age, when Nicolas Poussin developed a theoretical approach to the style based upon classical modes or orders.  Poussin astutely applied classical Aristotelian (delineated in Aristotle’s Politics) modes and orders inherent in his art; e.g., when describing his image: The Rape of the Sabine Women, he stated, “I wanted to paint a painting in the Phrygian mode.”  From Poussin onward to Picasso’s Guenica; James Rosenquist’s F-111 Fighter-bomber, and Duda Penteado’s Beauty for Ashes Project, the grand manner in art is traditionally distinguished by grand themes, grand structures, and grand compositions, exemplifying an over-riding moment in time that distinguishes everything pertaining to a particular event.  Today generally, only epic cinema aspires to this daunting ambition to create complex (historical, mythological, and religious) compositions that reveal particular moments in time, i.e., Victor Fleming’s Gone with the Wind; Cecil B. DeMille’s The Ten Commandments; James Cameron’s Titanic or George Lucas’s Star Wars, etc.  In this cinematographic light, Rodeiro grew-up seeing these grand manner films.  But, instead of picking-up a camera; he picked up a brush.  For example, Rodeiro TAMPA THE CRADLE OF CUBAN INDEPENDENCE, enamel-on-mdo, 40’ x 20,’ 1990, instantly reminds viewers of a drive-in movie projected upon a large flat outdoor wall; the image is also reminiscent of four US presidents (Washington, Jefferson, Roosevelt, 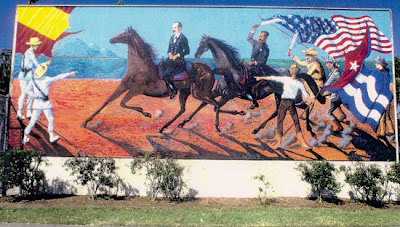 and Lincoln) chatting on Mount Rushmore (South Dakota).  In this epic “public art” illumination, in the West Tampa’s McFarlane Park mural, José Rodeiro attempted (using his imagination and “artistic-license”) to create a grand manner mural examining key heroes of Cuba’s War for Independence (Spanish American War).  In this mural, Rodeiro vividly painted historic individuals who had strong affinities or historic connection(s) with the Tampa Bay Area, such as, José Martí (the poet liberator of Cuba); Antonio Maceo (the brilliant guerrilla-fighter: “The Bronze Titan”); and Teddy Roosevelt (leader of the “Rough Riders”), plus other heroes, who are all atemporally, simultaneously, and  “Amnesisly”  charging across a stretch of Cuban beach ardently attacking Spanish imperial forces.  This imaginative West Tampa fabulation is an endeavor (by Rodeiro) to create a 2-D Mount Rushmore, which frankly and honestly places Tampa (Florida) at the inception of Cuba’s late-19th Century (fin de’siécle) liberation.


Sadly, after a dozen years of direct exposure to intense Florida sunlight and torrential tropical rains and winds, the image faded. Consequently, the inspiring image was removed in 2006. Nevertheless, the facts remain: José Martí raised money and weapons in Ybor City (Tampa) for the Cuban cause (una Cuba Libre).  Teddy Roosevelt and the Rough Riders used Ybor City as the staging-area for their attack on the Spaniards in Cuba.  Dr. Remember Maceo-Gomez (Maceo’s granddaughter) and her family, after departing Castro’s Cuba, settled in Tampa. Since, this painting held so much symbolic significance to the City of Tampa, one can only hope that Tampa officials will (in the future) commission this same image again within a large public building belonging to the city, thereby providing Tampa with something beautiful, as well as evocative of the city’s “true” role in Cuba’s liberation from Spain at the end of the 19th Century, as well as providing documentation of Cuba’s inception as a legitimate American “nation.” 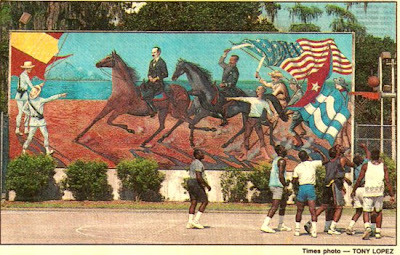 With its theme of freedom and liberty, this unique Amnesis grand-manner image courageously captured Tampa’s vital role in Cuban history. All of these historical connections are documented in the writings of Anthony P. “Tony” Pizzo (Tampa’s official historian), University of South Florida’s Pizzo Collection (CHECK the “José Rodeiro section”). In terms of historical information, Dr. Remember Maceo Gomez and Tony Pizzo collaborated on the Florida historical aspects of the mural, working closely with Rodeiro, providing historical facts, details, and pictures. Also, helpful in understanding Tampa’s role in Cuban independence is Caesar Gonzmart Jr.’s celebrated historical essay on Ybor City’s role in the Spanish American War.  Ultimately, Rodeiro’s gallant vision was to create an atemporal Amnesis 2-D “Mt. Rushmore” in West Tampa.  Rodeiro also created another historical narrative masterpiece titled THE LANDING OF DESOTO in TAMPA BAY, oil-on-wood, 24’ x 4,’ 1980 (Property of the City of Tampa), depicting the disembarkation in the Tampa Bay Area of Hernando de Soto, the famous Spanish explorer and conquistador, who arrived from Cuba with over one thousand adventurers (including a contingency of 200 ‘pioneer’ women), as well as the first horses, dogs and other animals that (in time) generated many outstanding American breeds. 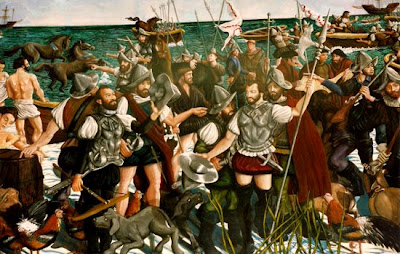 José Rodeiro a detail of the central panel of THE LANDING OF DESOTO in TAMPA BAY,
oil-on-wood, 24’ x 4,’ 1980 (Property of the City of Tampa). (Photograph by Murray
Taylor). 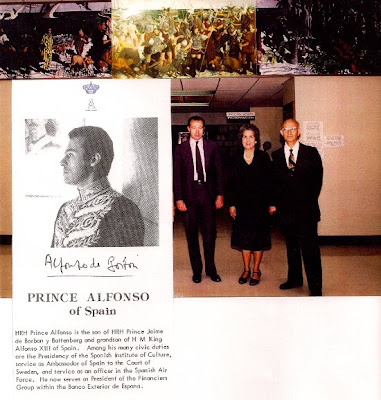 This mural first hung in the entrance to Centro Espanol Hospital, West Tampa (Florida) where it was dedicated by the late-HRH Prince Alfonso de Borbon, Duke of Cadiz.  Officiating at the dedication ceremony were the artist’s parents Dr. and Mrs. J. A. Rodeiro [(adjacent to the Prince)]. In 1990, the mural was purchased by the City of Tampa for the entrance to City Hall Annex (Mayor’s Office). In the 21st Century, the mural was moved to the Tampa Convention Center at the entry to Harbour Island, Tampa, Florida, where the work currently hangs over the entrance to the main Exhibition Hall (on the 2nd floor). The mural depicts the 1539 arrival of 1200 Spaniards, Cubans, and Arawaks led by Hernando DeSoto. This cohort explored most of the southeastern region of what would be the United States “discovering” the Mississippi River and bringing to North America the first horses, dogs, pigs and chickens. Only, 200 survivors lived to tell the tale; and in 1542, DeSoto also passed away; his remains were deposited (by his men) into the Mississippi River. 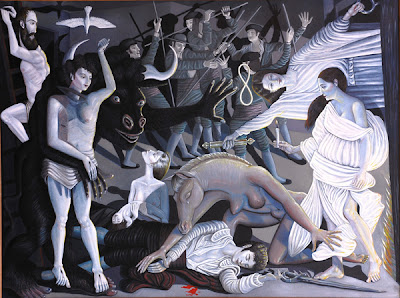 Another major Rodeiro grand manner masterpiece is his 9/11 painting, which was included in an event at “Ground Zero’s”  9/11 Tribute WTC Visitor Center organized by Meriam Lobel, who is the curator at Tribute WTC Visitor Center, Ground Zero, New York City, NY.   Below is Dr. Midori Yoshimoto’s analysis of Rodeiro’s 9/11 painting, which is considered a prime grand manner example of 9/11 art.


“In Rodeiro’s 9/11, there are allusions to images found in Picasso’s Guernica (1937), as well as Tarot card symbols, and references to ancient Cretan labyrinthic mythology. As in Guernica, noticeable motifs of death, tragedy, and conflict prevail; these virulent elements are appropriated as symbols of a contemporary massacre. By clearly referencing Picasso’s modern masterpiece, (which protested an unjust Fascist air-bombardment of innocent civilians, during the Spanish Civil War), Rodeiro directly confronts September 11, 2001, as a day of deadly horror and loss of life that has cast a malignant specter on current world events.” (Midori Yoshimoto) Note: Rodeiro’s 9/11 painting serves as front cover for Alan Britt’s 9/11 related book of poetry, Alone with the Terrible Universe, CypressBooks, 2011.

Rodeiro’s 9/11, which was painted in response to the events of 9/11 is considered by many critics as the seminal work on the tragedy, which launched the ongoing “War on Terror.”  To see other grand manner masterpieces by Rodeiro visit his Website’s URL at: www.rodeiro-art.com.   Despite the art world’s 21st Century exodus from the grand manner as a viable issue in art, the fascinating and Quixotic thing about Rodeiro is his anachronistic, courageous, and enduring enthrallment with the grand manner.

José Rodeiro is an award-winning painter, who has obtained major art fellowships from the National Endowment for the Arts (1986-87). The Fulbright Scholars’ Program, CIES (1995); The Institute for International Education: Oscar B. Cintas Foundation (1982) as well as the Inter-American-Development Bank, BID (1991), as well as other grants. He has held official artist-residencies in Maryland and Florida. He is a professor in the Art Department, New Jersey City University, Jersey City, NJ.