The uneasy, sidling and sidelong attraction –characterized perhaps as an “ambivalent attachment pattern” –between metaphor and materiality/materialism takes on new perspectives, and dare I say a new materiality, when the tense couple is plunged into the downy, bosomy embrace of the text/textile matrix, who happily engulfs them both.

Metaphor and metonymy: a few decades ago the standoff raged. Metaphor mystified reality by eclipsing the “vehicle” under the “tenor” –that is, the mere image or object is superseded by the significance of the “idea” or larger significance it is intended to convey. Metonymy, by using part of the “tenor” to stand for the whole of it –“20 hands on board” vs “20 workers on board,” exposed the material reality, the historical relations of asymmetrical power relations–that subtended all figurative language, and thus was a more promising, uh, vehicle for a socially conscious reading practice.

For me, who always thought, somewhat axiomatically, that the literalization of metaphor was madness on one end of the spectrum and fascism on the other, this was confusing, until I realized that the fascism, at least, involved an obsession, an over-investment with the tenor, to the exclusion of the vehicle.

When I became fascinated with text’s basis in textile, I wondered if I were becoming a fascist in my attraction to origins, my insistence that language had its roots in objects which it linked together across time and space. Line’s etymological debt, for example, to linen. The taut fishing line, originally no doubt made of gut and then of flax-derived, linen strands, becomes the line of verse, or the philosophical proposition, the come-on line that, as Alfred North Whitehead proposed, was a “lure for feeling,” a phrase used to great effect by the poet Robert Duncan.  The obvious debt of “text” itself to “textile,” with weaving being the linking concept and activity for both narrative construction and clothmaking.

But, as in the way metaphor’s mystification hid labor and other relations that maybe weren’t so much fun, “text’s” ascendancy over “textile” in the developing prestige of writing over making, of learning over laboring, of –quite frankly –men’s over women’s labor (though with heavy qualifications about historical/cultural specificity), has rendered the word “text” itself an obfuscatory metaphor in need of rehistoricization through deep etymology.  In the metaphoric world, “text” is the tenor, “textile” the vehicle. My task is to uncover the textile that subtends and makes possible the text both linguistically (etymologically) and materially (text is usually inscribed on surfaces that are either former cloth, like paper, or materials that are also used for clothing –leaves, skins, etc.).

My x-stitch and weaving practices are, one could say, acts of material etymology. In going back to a material embodiment of ideas (x-stitched words) and in focusing more and more on letters, I’m breaking down the language I speak and write into smaller and smaller units and reconstructing it from the ground up. In the textile arts, I’m trying to learn to spin with a drop spindle in order to go further back in time to the use of simple tools to accomplish world-changing technological advances and to experience cloth-making at an even earlier stage than weaving, which primarily uses already-spun animal and vegetable materials.

To paraphrase and repurpose Walter Benjamin’s somewhat absolutist and oft-quoted dictum, metaphor that occludes its material origins is aestheticizing politics (fascism); needle arts and textual work that reveal the embeddedness of the textual in the material politicizes aesthetics.

That is what the text/textile nexus means to me. 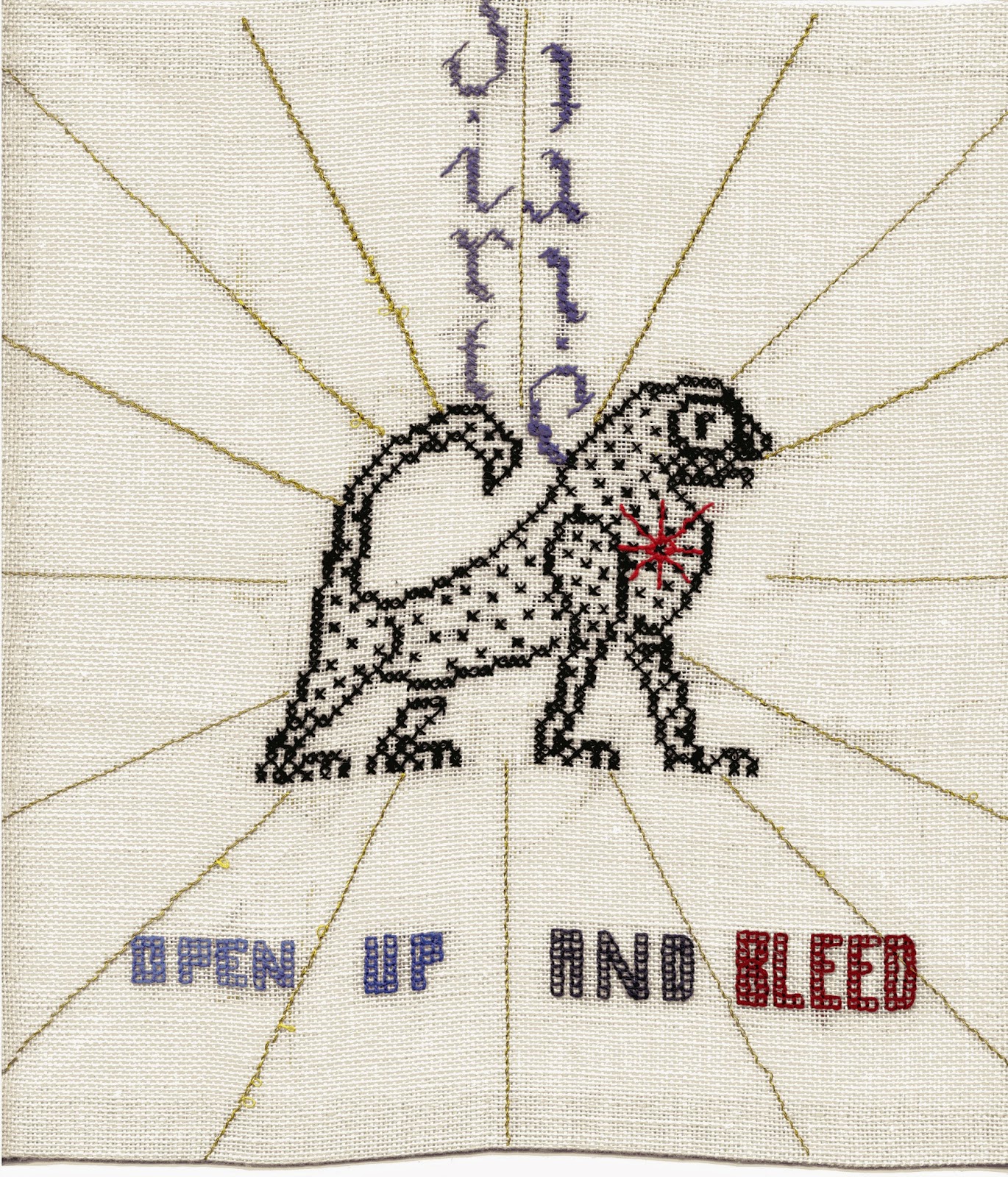 In her brilliantly bricolaged intertext mashup allegory, the female-kunstlerroman Blood and Guts in High School, Kathy Acker's ambiguously 12-year-old protagonist, Janey Smith, is writing in the room in which she’s being held captive by the inflammatorily named “Persian slave trader.” (Don’t ask. Read the book.) The font in the book goes crazy. She writes, in a child’s hand “I CAN SCRAWL AND I CAN CRAWL  I I I I I I…”  That simple idiotic rhyme encapsulates a poetics that links physical movement, writing, clumsiness, human development, and artistry. And more.

The words “scrawl” and “crawl” are in fact related.  See below.

Curiously enough, scroll and scrawl are not related but have become so through modern semantic marriage, which makes inlaws of many other words related to writing and undignified physical activity.

Scrawl is possibly related to crawl and sprawl; the former is a form of abject movement associated with "lower" life forms or human misery, the latter, with undignified posture, whether the body is at leisure and unguarded or cut down unexpectedly as from a bullet. But note the possible relationship to "scribble" through "scribble-scrabble," and note also the childlike nature of these words in relation to the childlikeness of the names of weaving and textile implements discussed earlier.

If you read to the end of the etymological entry below, you will find a reference to women's genitalia.

scrawl (v.)
1610s, perhaps from M.E. scrawlen "spread out the limbs, sprawl" (late 14c.), which possibly is an alteration of sprawlen (see sprawl) or crawl. Related: Scrawled; scrawling. The noun is recorded from 1690s.
scrabble
1530s, "to scrawl, scribble," from Du. schrabbelen, frequentative of schrabben "to scratch," from the same root as scrape (q.v.). Meaning "to struggle, scramble" first recorded 1630s. The game Scrabble is from 1950, proprietary name (reg. U.S.), probably from scribble-scrabble "hasty writing" (1580s), a reduplication of scribble.
doodle (v.)
"scrawl aimlessly," 1935, from dial. doodle, dudle "fritter away time, trifle," or associated with dawdle. It was a noun meaning "simple fellow" from 1620s.
LONGFELLOW: That's a name we made up back home for people who make foolish designs on paper when they're thinking. It's called doodling. Almost everybody's a doodler. Did you ever see a scratch pad in a telephone booth? People draw the most idiotic pictures when they're thinking. Dr. Von Holler, here, could probably think up a long name for it, because he doodles all the time. ["Mr. Deeds Goes to Town," screenplay by Robert Riskin, 1936; based on "Opera Hat," serialized in "American Magazine" beginning May 1935, by Clarence Aldington Kelland]
Related: Doodled; Doodling.
Doodle Sack. A bagpipe. Dutch. -- Also the private parts of a woman. ["Classical Dictionary of the Vulgar Tongue," 1796]


Femmage to Creeley: for Cathy Wagner and Kaplan Harris 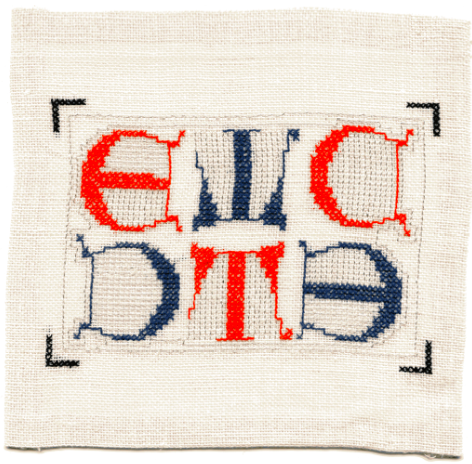 Maria Damon is a recent transplant from Minneapolis to Brooklyn, still reeling (in a good way).