Where Quotes Impact The Hapic

There is an attractive way in which some poets will appropriate and re-incorporate the didactic texts from older, even ancient texts. I am talking here now of language in the  bed-rock of philosophical and/scientific writing, it’s familiarity and clarity even now more stone clear than the original moment of its creation. Take Hume or Spinoza or Plato. The quotes carefully framed and timed emerge in performance with the insistence and solidity of the textures of a cave wall. Such quotes often have the regenerative effect of reforming the power and re-use of a forgotten, and now valuable memory.  The poet Norma Cole for whom, unfortunately I have no haptic drawing, has done this kind of juxtaposition very well. 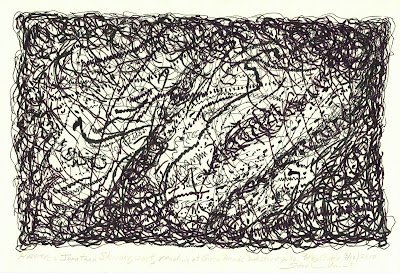 In a more contemporary ecology conscious globe, the language can be made to again hear afresh. Familiar  or not, texts of the naturalists, say, Thoreau or Olmstead and/or the words of the late Rachel Carson, that is writers will shape the landscape of the listener. The quotes that emerge, whether lush or stark, are sometimes left as singular as stone, and/or they are juxtaposed against observations taken within the poet’s immediate world. To listen with a haptic ear to a reading in this context becomes a fugue of various dark and light, sometimes large volumes. These can  border on collision or fusion. Within that edgy, often transitional balance, a separate set of rhythmic marks and strokes of line will appear to stab or take flight across the page. The good poem well read – whether sourcing the contemporary or ancient – is in a face-off, a sounding out with what is immediately present and real. The poet reading well blesses this condition. 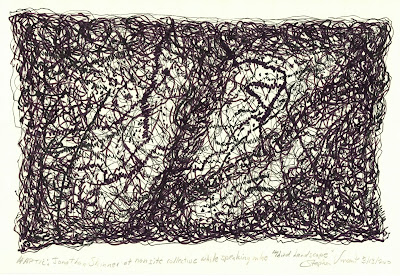 [Tap cursor on drawing to enlarge]

Posted by Stephen Vincent at 4:51 PM