Poetry as a Form of Investigative Flight 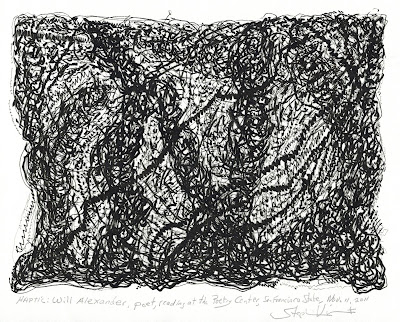 In terms of listening to poets the Haptic is a way to mediate and/or give a spatial view of the way a poem moves, indeed sometimes appears to fly into the world  – or, at least, the acoustic world as it is presented to our mind’s ear. When I hear the work of Will Alexander, the language seems to literally travel back and forth within and through inter-stellar congregations of space(s). The pens travel closely with the poet's voicw through both light and dark meshes of both perception and sound. We are on this world and then not. As a Black American poet, I often sense Alexander’s work is a refusal to be bound down, or up, in the given ropes of white and/or other kinds of repression. The music of Sun Ra, planet to planet, for example is similar in its refusal. The work of the haptic is to go to the felt and immediate life of the poem. The rhetoric of what the poem may or may not be about is given up. The tangible drawing replaces that. Not a window pointing our eyes elsewhere. The drawing equals its own substance. 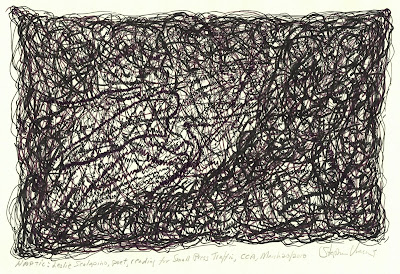 Some poets take use into darkness in which there is no sense of flight, but yet a persistent movement through whatever the obstacles. Leslie Scalapino read at Small Press Traffic two weeks – I believe – before she died. She had pancreatic cancer and there was no out from her condition. On stage she was very brave and said nothing about it. Her fidelity was to the language of her work. There was definitely a forboding sense of death within it. The work, as I now remember it, was a boat trip on a very polluted river in China. The fish rose barely through the muck to suck on the air. It was a work that evoked her own struggle to survive, but also the struggle of our globe, human and natural, to breathe. Her words remained intensely focused as they managed to make a weave. The pens followed her tightely focused observations into what here appears to be a combined vertical and horizontal web. The marks offer an insistence of the presence of her voice and thoughts as they seemed to float down this inevitable passage towards death. 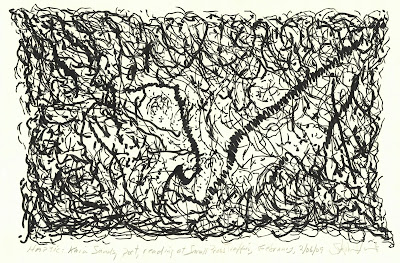 In a reading sometimes the poems flutter around the edges of an evening to slowly build their case. There may be an underlying argument going on. The poet does not want to take anyone for a fool. The work needs to accumulate not only evidence but a legitimate sense of passion. If it is not well done the cats in the audience will take the bird by its throat. On those occasions one can always sense a kind of pervasive silence in whatever the hall. On the other hand, if everything has gathered, the poem finds itself spreading its wings into an intense concatenation of words with which both poet and audience find themselves  risen. The lucidity can be sweet and overwhelming. In making a haptic drawing during a reading by Kaia Sands I watched the marks unfold as such into flight.

[To be continued. Remember it is possible to tap the cursor on the drawing to enlarge it.}

Posted by Stephen Vincent at 8:55 PM