Like Irving Feldman’s “In Theme Park America,” Paige DeShong’s “Funhouse,” (part of a photographer/poet collaborative exhibition I put together some years ago) eerily captures the sense in which the whole culture, and we ourselves, as persons, become absorbed into the world (call it a “fantasy world,” or an “illusory world,” or a “mythic world”) of our mediations. It has the penetrating advantage of being “candid”—a singular expression of . . . what? The pure products of America going crazy? The woman (a friend of Paige’s) surrounded by figurations of her cultural iconicity, but enthroned and lit up like a celebrity in a nightmare: Fantasy? Illusion? Myth? You can have it all: and that says it all. 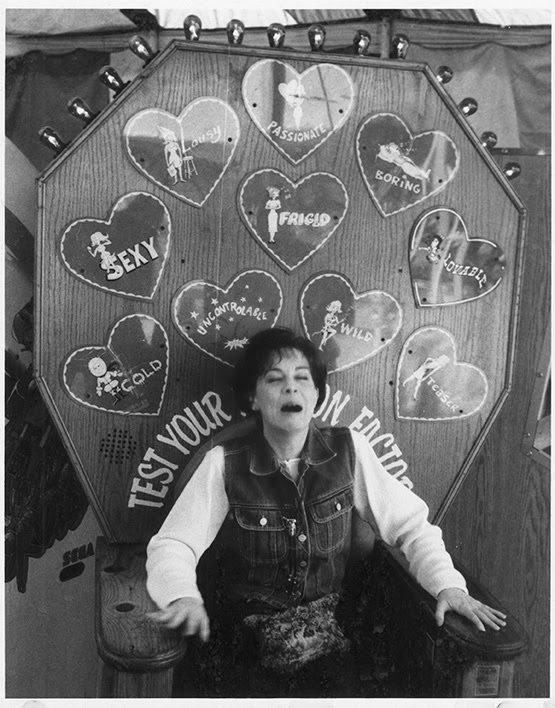 "She belongs to" "the tyrant," "though she thinks she's" "her own" (Alice Notley, The Descent of Alette)

Her life a cartoon
for which everyone else
writes the captions, each new scene. Until the day
of the throne, her amaze
at its offering, spatter
of gracious smiles from the attendants she never
could have predicted and she got to pull the lever. And
set the speed and tension. Adjust
the pressure.
Control the pitch and g-force. Decide
whether to be poised or precipitous.
Choose the sign: "Welcome!"
or "No Admittance!"

Then locks the brake and brace
back and crank, ease the speed forward
until it revs and throbs
so that the apparatus shakes,
shudders and shakes as if the whole world were sobbing, then
takes her calm between
her teeth, bites down hard (it draws
some blood, it tastes good),
picks her course, kicks
off the brake

"Belongs to" "tyrant", "thinks it" "own" (Alice Notley, The Descent of Alette)

Life's a moving
in which everyone
written descriptions, each new scene. By day
the throne, amazing
forecast supply
cute smiles escorts who never
could be predicted and has to pull the lever. and
adjust the speed and voltage. Set
pressure.
Check the height and strength g. Decide
if you want to be in balance or in haste.
Select the point: "Welcome"
or "no access"

Lock brake straps
and kick back, facilitating the advance speed
until it turns and throbbing
so that the clamping device,
chills and shivering like everyone sobbing, then
takes stand between
his teeth, biting hard (draft
little blood, good taste)
reiterated its course, kicking
brake

Please note: I think my original version is a “better poem,” though I understand the many ways in which that’s open to dispute. All I want to point out here is that passing that poem through a distinct mediatory apparatus has produced eccentricities and deviations that are themselves provocative (“draft / little blood, good taste”; "in balance or in haste"), and while I’m sticking by my poem, the translation device opens its language up in ways I’d be a fool not to continue to consider—as a way of “reiterating its course,” maybe, iteration after iteration.
Just as any translation device always fails in some measure—and in that, achieves its specific success—the “correction” in autocorrection is a joke waiting to happen. We’re better than our machines, because we’re worse. We love that! Our gadgets give us directions and we wind up lost in the most fascinating spaces, inner and outer. We want to be lost, want our math to be off, our scene bizarrely lit, framed, and edited, and our algorithms scrambled. At least, part of what we do, which makes “the media” and, in general, mediation, so crucial to our self-discovering process as artists of one sort and another, is to enlens ourselves before the world. Like the magnificent filmmaker Guy Maddin, we take a bit of pride in not being sure which lens does what. Putting ourselves in a fantasy chair and letting its current shatter us is how we discover the fragments that matter—that “count,” however imprecisely.
And if, like Sudnow’s slick repeaters of phrases, we accommodate ourselves a little too comfortably to a given medium or mode of mediation, part of our training or instinct (perhaps both) presses us to fight the common currency, to beat our media before they beat us. Talk about love-hate.

Whole-hearted thanks to the fine writers and visual artists who gave me permission to upload their work. And to Hal Johnson, to paraphrase John Lennon: Thanks for the use of the medium. (JM)

Paige DeShong is an old friend of Jerry McGuire's who lives in Austin, up the hill from Barton Springs where she swims most days.  She makes jewelry and sculpture from various metals and found glass which she sells through her studio and at https://www.etsy.com/shop/paigedeshong. Her son August keeps her out of trouble.