Betsy Struthers, WRITING DOWN THE MOON

HUNGER MOON
Winter
Days of blue shadows, days of fierce light, days of waiting. One day,
you skip school, trudge across the abandoned football field, sit on your
clipboard, toboggan down the ravine’s steep slope. Pulling up the
desiccated fronds of milkweed and straw, you slow yourself before
you hit bottom. The streambed a dark slit between mounds of drifted
snow. And the naked dogwood on its banks, red as fingertips. Red as
his cock. You snap off a branch, poke through to the ice surface. Could
skate if the stream were wider. Could skate all the way to the lake and
then beyond it. Write your name on the snow and throw yourself down
on it, make an angel, wipe out the letters with the sweep of your arms.
Wings. If you could fly. But you can lie here where no one will see you.
Blue sky fills your mouth. You can feel it at the back of your throat, that
shove, and it wasn’t so hard, was it? he said. You had to drink another beer
to get the taste out. If your mother smells it on your breath. You ate
a whole roll of mints, and the tang is like this air: old and cold. You
could build a hut out of deadfall branches. Be a hermit. Starve. Nothing’s
getting past these lips again. You want to be hungry, but you’ve had
too much to eat.


FLOWER MOON
Spring
One of those nights we’re both wakened
by bad dreams, the kind where one of us
is lost, one is losing. No point in tossing or
turning pillows over to find a cool spot:
sleep’s left us. Let us go out to the garden,
lie down on the sweet beds, on violets, on
woodruff under the lilacs, under the apple tree:
moon caught in their webs of blossom. Listen:
lily of the valley rings the return
of happiness, tulips declare love,
hyacinths constancy. Let the flowers
speak for us. Let nectar coat our tongues.
Forget-me-not. Perennial and everlasting.


HOT MOON, STRAWBERRY MOON
Summer
where garden edges to the shore
neat rows of staked beans and tomatoes and tall fronds
of lettuce, already bolted, and tendrils of carrots rooted in soil
rich with compost and ashes
wither in the heat
where leaves shaped like hearts hide their red hearts
where I kneel on old straw, fishing berries out from under these
umbrella leaves, wishing I had a parasol myself, a wide-brimmed hat, sweat
slithering between shoulder blades
that clench and flex
with each pick and drop in the bucket
where a heron steps between ripples, raising and lowering
the gray flags of its wings
where we come in the long dusk with bowls of fruit, with candles
to smoke the flies that rise even as the moon rises
before the sun has set
where we can see water glowing, the rings where fish arc
where leopard frogs chorus
where we fill our mouths with such sweetness we forget
this is the half point, the earth is turning
back to darkness
where we invoke: hot moon, strawberry moon, moon
of the long married, moon of breasts and buttocks bared,
moon of mosquito, bitten moon, moon of diving
in and under, moon of coming
up together, moon of
us, moonstruck. 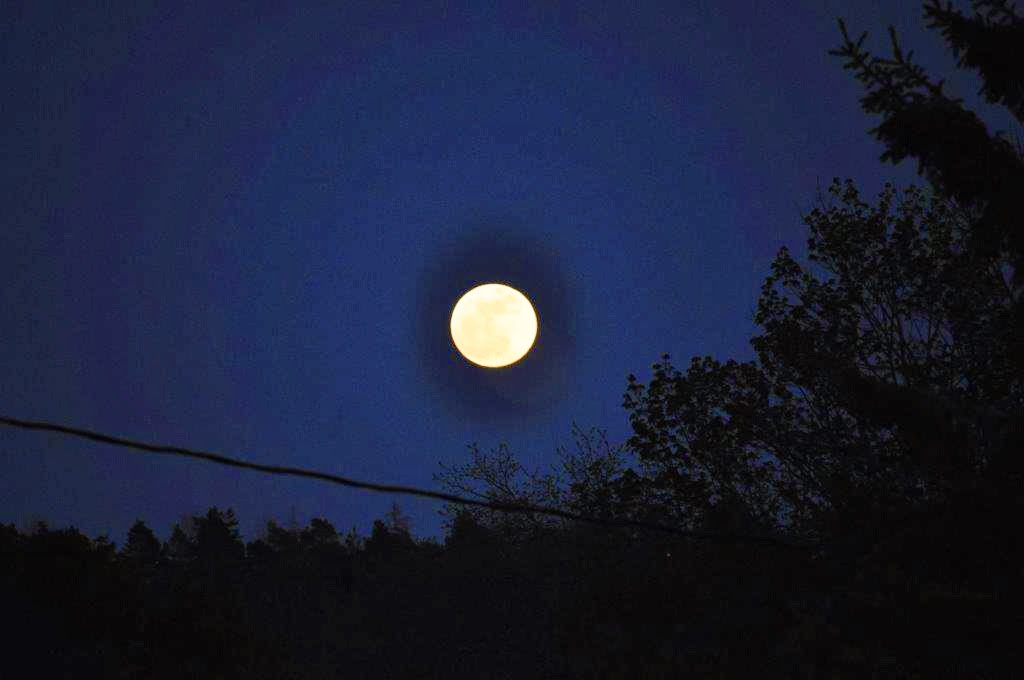 HARVEST MOON
Fall
Blood and fur smear the white line,
raccoon curled on the soft shoulder, another, then
another, a porcupine, what might be
a weasel or a cat. Feasts tomorrow
for the vultures and the crows, blow flies, voracious
ants. We swerve around a broken snake
wriggling on the asphalt, spot a deer
splayed half in, half out of the ditch. Slow
to follow a line of orange cones around a curve:
van turned turtle, smashed into a crumpled
pickup truck, both crawling
with paramedics and police. Off
the highway to a secondary road, silver
between black overarching trees. Switch on
high beams to dispel whatever lurks
in shadows. Wary, but unprepared
for the flush of grouse in front of us: a
thud we know means nothing good. Yet
it’s late, so late, too late. We beetle on
in a rain of white feathers, front fender
bearing our harvest home.

Betsy Struthers, a past president of the League of Canadian Poets, has published three novels, a book of short fictions and nine collections of poetry – Still won the 2004 Pat Lowther Memorial Award for the best book of poetry by a Canadian woman. She lives in Peterborough, Ontario where she works as a freelance editor of academic texts. Versions of these poems first appeared in Where the Night Comes Closest (Black Moss Press, 2008) and in All That Desire: New and Selected Poems (Black Moss Press, 2012). More information can be found at www.betsystruthers.ca or www.betsystruthers.wordpress.com.